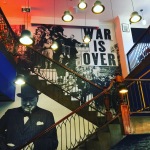 While the first international ice hockey game in Wellington, Canada vs USA was delayed, we headed to The Churchill, Northern end of Lambton Quay, to kill some time. This place is another venture linked to the Wellington Hospitality Group. I’ve not heard of anyone that’s been to this gastropub, so Ann, Eileen and I were quite excited to try something new. I can’t even remember what it was called before it was Paris as it’s had quite several name changes. For the oldies out there it used to be The 1860. Now that’s going back a few years.

The décor has hardly changed at all except for the British flag on the ceiling and a few other quirky Brit things to keep with the theme of course. It’s a three-storey British pub and each floor is different. I heard that the espresso martini here is good, but tonight cocktails were being served upstairs along with main dishes. I’m not sure if that’s always the case or whether it was just because of tonight’s game. Well the game that never was shall we say. More later about that.

We were happy on the ground level anyway for tap/craft beers, ciders and snacks. And funnily enough I forgot to even venture up to explore, which is not like me at all.

It was quite busy with a mix of international visitors and there are no borders or barriers when it comes to sporting events like this in Welly. Everyone talks to everyone.

I opted for a cider and as there were two on offer, the barman let me have a wee taster in advance, so that was nice. The girls ordered their pints and I had a wee taste of Eileen’s local Welly brew, Fortune Favours pina colada. I loved it as you could really taste the coconut. I’m being so pulled over to the beer side but avoiding it due to the wheat.

For snacks, we loved our chicken wings with blue cheese dressing, pork belly bites and chips. Our calamari was a bit soggy but still tasty. The presentation was excellent. We could have splashed out and got a platter but there were things on it that some of us weren’t fussed with so choosing separately was fine. I’d really like to try their mains another time, when I’m down that end of town, as they boast some yummy sounding English dishes e.g. Beef Wellington (would be hard to beat my friend John’s though!), fish and chips, ploughmans, bangers and mash, Cornish pasty to name a few. And am definitely coming back to try that Espresso Martini.

Our service was very friendly and efficient. Time passed quickly and before we new it, word spread like wildfire via people’s devices, that the game had to be cancelled due to a broken pipe. Darn it. Fortunately we were townies so it wasn’t major skin off our nose with regards to transportation. The girls headed home to watch the rugby. But those poor folk that were stranded and ended up going again on Sunday, like us, and it got cancelled again?! Such a shame, but out of our control. Oh well we still had a fun night and I got some new blog material!