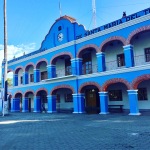 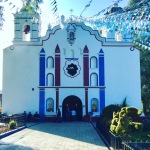 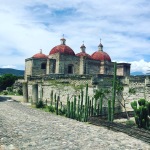 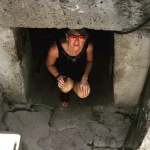 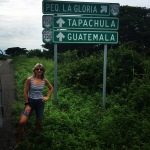 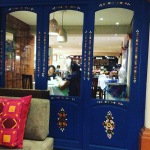 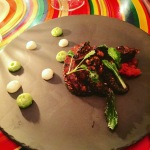 We left beautiful Oaxca and travelled in our Mercedes MexTrotter minivan, to this cute place called Mitla. The church was beautiful as was its famous 2000 yr old cypress tree. We visited these ruins and got to climb in caves. They had these wee markets closeby and I purchased a gorgeous black and floral scarf. We then travelled a further 4 hours arriving for lunch at the Sumidero Canyon. This is Mexico’s South East significant natural spectacle. Lunch was good. It was really hot but our boat trip through the canyon was so much fun. We oohed and ahhed over the many crocodiles, who like us were hot, so would frequently cool off in the water. We chose to not join them today.

A further long drive had us arrive late afternoon an another lovely town of San Cristobal, in the Chiapas region. Unfortunately the hurricane that hit Veracuz was still having an impact, so we experienced unusual cool weather and rain. However the sun shone the next day. Chiapas was also the epicentre for the recent earthquake so I hope everyone is ok there now.

We were so lucky to have a Spanish couple, Carmen and Carlos on our tour. They were uber foodies like me but they did the research so foodietraveller was able to sit back, relax and trust their restaurant picks. That night we ate in the private dining room of the Casa del Alma Hotel. The food was spectacular with a three star pricetag.

The next morning, we did a wee tour of the markets and the church, and then had the afternoon free. I found this fab place for lunch : Buambillias. The steak, avo and chips was divine. Hubby walked his off with a bush walk with Cesar our tour guide and the rest of us chillaxed. I meandered around the shops and found the most amazing coffee/chocolate place with free wifi.

San Cristobal is full of lovely boutiques and a lovely town square with live music. That night Carols raised the dining bar again and we were blown away by our meal and restaurant ; Hotel Bo. Were we really in Mexico? This place was the most stunning, funkiest place with beautiful decor and such a nice vibe. The food was divine. A little more expensive but the cost in NZ would have been double so a bargain really.

The next day we travelled to Zinacantan and got to walk through local Mayan villages to the square with its beautiful church. No photos allowed in this one due to respect for their religion, beliefs and culture. We got to witness live chickens that were sacrificed at the altar for the sick; to exorcise the demons. Men would also take turns to sweep palms strewn on the floor back and forth. It was fascinating. We then moved on to another wee town to sample locally made tortillas in a home. Our tour friends Phil and Leigh got into the spirit and dressed in the traditional wedding garb.

That night we had the most weirdest hotel ever; the Calli in Tehuantepec. It was in the middle of nowhere and was like a 70’s throwback hotel. But it had this huge supermarket, so hubby and I took a walk to buy some water. On the way people would beep and wave to us and local restaurants had these live bands playing, singing their hearts out with no customers. It was so funny. Dinner was equally amusing as we got lost in translation however our meals were ok.

Cesar our tour guide and Victor our driver, were both so lovely. Cesar had spent time in the US so his English was fluent and easy to understand. Victor could sort of understand us but not respond much in Ingles. I had to share our pronunciation of grassyass (gracias) with Cesar.  He thought it was hiliarious as he’d never heard it before!! I thought it was international but perhaps just Kiwi/Aussie/English humour.

If you’re loving my posts, my ultimate fave part of our Mexican tour is next to come. Stay tuned fellow foodietravellers.