So we’ve had the third biggest quake in 100 years in Welly recently yet it ‘s nice to know a nicer type of shaking has taken place in upper Cuba St. Sweet Bakery and Cakery has opened with amazing cakes and design-your-own shakes. Epic. The Mama café is in Karori and I just happened to try ’em out both lately. END_OF_DOCUMENT_TOKEN_TO_BE_REPLACED 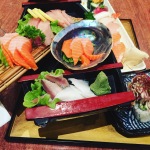 I love Kazu, a Japanese Izakaya style restaurant on Tory St. It’s been around since 2002 and also has a sake bar on Courtenay Place. I like this one as it’s more original with its seating and open kitchen.

This visit was a girlie group and it was just perfect on a Monday night.We ordered some divine edamame and the girls also swayed me with trying the sashimi platter for starters. As I try to avoid rice, sushi and dumplings (as much as I love them!), they were not an option. They did offer fried chicken nibbles and chicken karaage which is yummy but the raw fish was delicious with soy sauce. They were out of tuna so it was all salmon but all good. I need to eat more fish I know, but I struggle with it as I love meat so much.

As this was a first visit for others I recommended the hot pot as their main, as you get to self-cook which adds to the experience. I had the BBQ chicken off the Teppan & Grill section and the other gals had the BBQ salmon and teriyaki chicken. They have lots of Udon noodle dishes or deep fried pork dishes also.

They have some good red and white wine, spirits, Japanese beer as well as sake which is served warm as far as drinks go and of course green tea.

We flagged dessert but they have Tirimasu (which is funny in a Japanese restaurant) and a black sesame or green tea ice cream and a few other options. I bet the ice cream is good as we know the Japanese love their ice cream.

Service was brilliant and prices good. You can use your entertainment card which helps.

Kazu is a Japanese name for a male or female. It means first, obedient and disciplined. That’s me; Kazu Foodietraveller!

I’ve now been to Sterling Woodfire Eatery on the Terrace about four times and have enjoyed each visit. I can’t wait to try lunch and dinner. It’s the sister restaurant to Egmont St Eatery so has a good rep for food and is part of the new funky Park Hotel. The hotel stayers will welcome this with open arms and it will certainly add to their fab stay there for sure.

END_OF_DOCUMENT_TOKEN_TO_BE_REPLACED 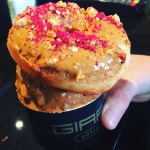 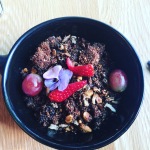 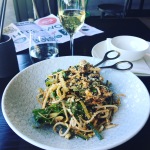 Craving a visit to Auckland CBD, I booked a solo flight on Labour weekend. As my foodie haunts list is huge, I had to narrow it down and plan logistically, so I could fit in as much as possible. Boy did I do well. END_OF_DOCUMENT_TOKEN_TO_BE_REPLACED