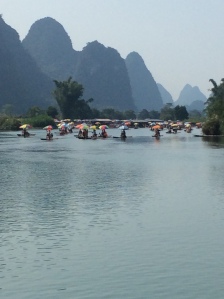 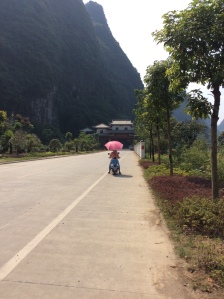 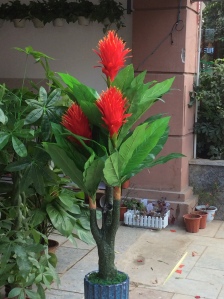 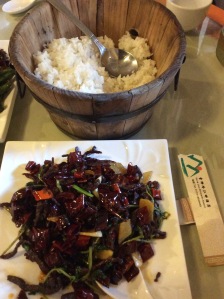 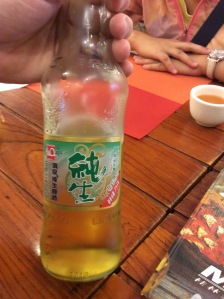 We arrived in Guilin early evening, after an awful flight on China Eastern; service and food atrocious. Lucky we snared a few fabulous dumplings for lunch at Shanghai airport to tide us over.Wendy our guide greeted us and we drove to the Giulin Park Hotel. Our room and bathroom were huge, and it was a perfect location.

Not wasting time, given we didn’t touch the dreadful packaged, processed snacks on the plane,  we headed across the bridge for dinner to find a recommended restaurant called Rosemary. Doh, I had not only left my iphone/ipad behind but also the restaurant Chinese address! Of course I thought ‘She’ll be right mate’. Wrong. We were told if we got lost that all the young people spoke English. Phew. However after several attempts, no comprende. Now both hangry our mood was only temporarily lifted, when our eyes set sight on the most gorgeous illuminated riverside that we stumbled upon. Later we did find one restaurant with an English menu, but I won’t bore you with the deets. as nothing spesh. Local beer and our favourite spicy bean dish (rice substitute) never failed us though and it was easy for me to follow paleo.

We finished the night off about 8pm with some reflexology at a local place serviced by young boys monitored by the boss. This was such a hilarious experience as we made them and the clients laugh with our Chinglish. They did such a good job and it was about 25 RMB  each for an hour. I think we made their night, as it didn’t appear they’d come across many tourists willing to give this a go.

The following morning after a fab Asian breakast, we had a 40 minute drive to cruise from Zhujiang.  We were inspired by the breathtaking views of the mountains, rice paddies and water buffalos. It was like revisiting Halong Bay in Vietnam (which I bang on about as it’s an absolute must). The weather was hot and it was lovely to get some vitamin D, breathe and drink in the beauty and fresh air. Unfortunately the Western lunch served was horrendous stodge so I chose to not eat and my frooze balls and fresh dates came in handy.

Arriving in Yangshuo was lovely. Small and intimate. Our Yangshuo New Century hotel was about 15 minutes from the market. We chose to walk vs take the golf buggy offered. Our room was an ok size with ceiling and wall mirrors. Yes interesting to say the least.

We then got whisked off on our hired scooters through town, us in tandem following Wendy through the countryside. The two lane road was narrow but exciting. OMG talk about DDG (drop dead gorgeous). The scenery was stunning. We came across the most cutest tea house cottage which is apparently becoming the norm now, for Europeans to purchase land and develop accommodation in the middle of the boonies.The absolute highlight though was arriving at Yangdi where we stopped to see the river overflowing with tourists on bamboo rafts with colourful umbrellas. It was just such a magical setting and blew my breath away. Some of the drivers had large water guns and were having so much fun firing them at the other rafts. I’d highly recommend a visit/cruise. We chose to explore the countryside further.

Dinner at Cloud 9 recommended by Wendy was fabulous and she made our reservation. You can also do a cooking class here if that takes your fancy. Rice arrived in a bamboo bucket and our pork, beef and bean dishes were spicy but lovely. I tried a glass of rice wine (but not the 58% local one) and had a sip of the local beer.

After dinner, we wandered through the night market and stumbled on a fish pedicure. It took me 10 minutes to pluck up the courage to do it, as I didn’t want to be a big girl’s blouse. Hubby had tried this a few times in Thailand.  No pressure or anything. The fish do the work to get your feet smooth by eating away your dead skin. Because the fish nibble on your cuticles and between your toes, they’re a more effective exfoliant than a pumice stone. Freaky yes but it’s simply a tickling sensation. I would do it again.

Breakfast and coffee at the hotel were dreadful. The Europeans weren’t allowed to dine in the Chinese restaurant. We should have complained beforehand, as reception then said it was ok. We then went in search of a trendy espresso place we spotted earlier in town for a decent cup of java, but doh it was closed.  Places open 10am till 10pm.

Our guide and driver then took us back to Guilin to Fubo Hill. Wendy (24) told us it was going to be a 40 minute climb and she couldn’t believe we got to the top in 5 minutes. It was a fairly steep climb but not too arduous to get a 360 city view. Seriously we were shocked by her lack of energy.  Most young people don’t eat breakfast, as they prefer to sleep. Go to bed earlier! The Menaras blew her out of the water, at almost twice her age. Ha 🙂

Next stop;the Reed Flute Cave. I was a little hesitant thinking this was just going to be another glowworm cave. Don’t judge a cave by its entrance. We entered via the gift shop and I did happen to buy a gorgeous scarf on the way. Bonus. The layout inside was great, it was really interesting and the lighting was incredible.

Next stop lunch. Wendy chose a place I recommended from our China guide book that she’d not read!. McFound; not the most inviting name but it was bright, clean and busy. The service was great and the food very good with a definite kick, that made me cough and my eyes water. We chose a beef, pork, and green bean dish and also got to share some noodles. Yum.

I heart you Giulin and Yangshuo. Love you more than longtime. Follow me next week to Xian.