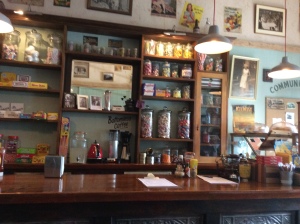 My dear friend told me about this little hidden gem on Adelaide Rd Berhampore called Celie’s. Blink and you’ll miss it.

This was a dream of a New Yorkian and after moving to Welly, she made her dream a reality. Reality was that there was no sign of her and her fledglings need her to provide some clearly defined job roles and guidance.

Grandma Celie and family pictures adorn the walls of this retro cafe. Ella Fitzgerald and Ray Charles play in the background and the servers are dressed in pink candy-striped uniforms. The wall shelves are laden with big glass jars of American candy and you’d swear you were in an old-fashioned American candy or ice-cream store.

Opened 6 weeks ago and refitted by Weta, other girlfriend and I think it could still benefit from a re-design. The concept is fab although we would suggest they get remove the shelves/bookshelf and have square tables and chairs that would sit flush against the walls, to allow for more peeps. Although quaint, the old couch at the front could be replaced with a large table as it’s really only conducive for having something to drink. We watched some punters struggle with eating on their laps. We’d also love to see the coffee machine moved to allow for more tables in that area. The red counter stools are cool and very NYC dinery but when you have a baby buggy or two, it gets very congested.

The menu is mouth-watering and apparently the best seller is the fried chicken and waffles which we ordered but alas Mr chicken man hadn’t arrived. What? On a busy Saturday? We settled for sharing the blueberry stuffed waffles with bacon and the eggs hollandaise waffles and girlfriend also had a fig and dulce de leche smoothie. Absolutely delish. Couldn’t fault. People beside us were devouring the cornbread and chilli (con carne) waffles and as you’re seated closely, their facial expressions said it all. As did the peeps at the counter just loving their fried chicken burger and fries. Mr chicken man obviously finally did arrive!.

They have tempting shakes e.g. lemon meringue, strawberry ripple, which are very hip at the moment, plus you can get a coke or cherry float or a variety of sundaes and other amazing desserts. You can  take away savoury pies, cinnamon donuts, cinnamon buns, or pop tarts. Kids will be bouncing off the walls here with all the sugar, as will the adults and it’s great if it’s a treat! We noticed the clientele were mostly American.

Our lattes were great but I was gutted to learn it was an Auckland brand, when I’m a staunch Welly coffee capital supporter. I risked trying a filtered coffee and should have known better as I assumed, with an American owner, it would have been good. It was only luke warm, and was kept in a thermos?. Celie’s lovely granddaughter did go and make me a fresh pot which took awhile, but was much hotter the second time around.

Orders are taken at the counter which is bit uncomfortable for both parties, as you are leaning over people who are eating and you also pay your bill the same way. Perhaps they could take table orders and move the takeout cakes to the other end of the counter and replace them with the till? This would be more efficient.

The staff are warm and friendly and this place has certainly got huge potential, but it just needs some fine-tuning. I will definitely be back with hubby and other girlfriends. I do look forward to some changes being made though. Lucky Berhamporians!! Shake it on, shake it on yeah.