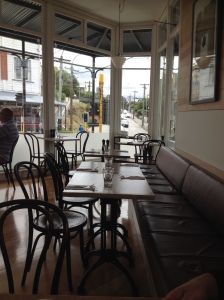 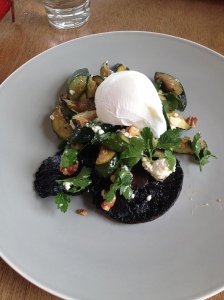 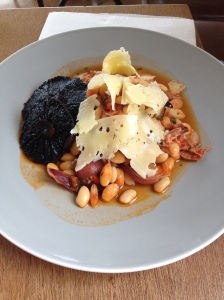 Being locals, we thought we’d try one of the newbies on the block for Sunday brunch; the Salty Pidgin in Cleveland St, Brooklyn. I was talking with a friend the other day and we agreed that this spot unfortunately has never been the same since Lois Daish closed the Brooklyn Bistro in the ‘80’s.  Lois just hit the mark in every way and it was perfect. Everyone as been mourning since.It’s such a lovely site and inside the café has a really nice feel. It’s light and airy with a well appointed bar and a mixture of tables and banquettes. No guessing where I sat right? The service was great but it did lack ambiance.

The menu is small which is fine as that makes for easy decisions. We were starving as we’d been for a big walk. I ordered the grilled zucchini with lemon, feta and a poached egg. I substituted garlic mushies for the bread. Hubby had the homemade baked beans with ham and also had substitute mushies. He enjoyed his although he did have to add quite a bit of salt and nope he wasn’t eating the pidgin. What does Gordon Ramsay bang on about to his chefs? ‘Taste’ ‘Taste’ ‘Taste’ your food before it goes out.

Hubby said to me later that they must have thrown the ham hock from around the corner, which made me laugh! Translation; there wasn’t much of it. Well unfortunately although mine was truly delicious, it barely touched the sides and for $18, we didn’t think it was good value. Maybe we’d have fared better by starting off with eggs for $9 and adding some sides. I thought by finishing with a soy latte might have filled me up but it had to be the most bitter soy latte I’ve ever had.

The wine list looked really good and they also serve some good craft beers. We had a quick squiz at the dinner menu and again although small, it looked nice.  I don’t mind paying for quality but I did  notice some mains priced at $34.00, which I thought was a tad steep and no doubt you would have to add on sides.  Ootay riceypray=too pricy in Pidgin English.

This is a shame as this place does have potential. Maybe if they get some feedback on their portions/prices, they might adjust accordingly. Arewellfay= farewell.

3 thoughts on “The pidgin is not too salty!”